Dame Cicely Saunders is recognized as the founder of the modern hospice care movement. In 1967, she established Saint Christopher’s in South East London, a hospice dedicated to serving patients at the end of life.

In the 1970s, Dame Saunders came to speak to a group of students at Yale University and as a result, a nurse and volunteer in Connecticut made the first home care visit to a hospice patient. Quickly, the ideals of hospice were adopted across the United States. Initially serving patients often in the home, hospice care primarily served those with cancer, ALS and other fatal diseases in the beginning phases of the hospice movement. With the onset of the AIDS crisis in the 1980s, hospice providers became pioneers in caring for those with advanced AIDS.

Here in central Ohio, Selma Markowitz became an advocate for hospice care after reading a magazine article about the purpose and impact of hospice care on an airplane flight home. Around the same time, Kathleen Brown cared for her dying husband and dying mother. She had no medical training and she felt there should be a better way to care for loved ones.

Each woman talked to Licking Memorial Hospital about the need to bring hospice care to the community. The hospital introduced them to one another and loaned them space to hold planning meetings with like-minded community volunteers, and hospice care in Licking County began.

In January 1982, nine community leaders and volunteers brought together by Selma Markowitz and Kathleen Brown first met to discuss end-of-life care in Licking County. Unlike most founders of community-based hospices, neither woman had a background in healthcare. By September 1982, the group legally formed Hospice Service of Licking County, Ohio, Inc., now known as Ohio’s Hospice of Central Ohio.

Throughout 1983, the committee developed a hospice care program and recruited volunteers to care for patients and families. Virginia Follmer, RN, was appointed the first executive director of Hospice Service of Licking County and Licking Memorial Hospital donated office space in the basement of the Wehrle Building. Selma Markowitz begged and borrowed office furniture and filing cabinets from members of the community and volunteers served as office staff to support the organization. As hospice care in Central Ohio became a more established care option, Newark Mayor Bill Moore issued a proclamation for Hospice Month in November.

Since the beginning, volunteers have been vital to the success of not-for-profit hospice care from care support to community education. Volunteers formed a Speaker’s Bureau to present hospice care to churches, businesses and organizations throughout the community. They shared their vision of hospice and explained how hospice care supports people who wish to die at home surrounded by family and friends.

Our first Hospice Service of Licking County patient was admitted on July 17, 1984, and 18 patients were served that year. The newly formed not-for-profit hospice’s intent was to not bill patients for hospice services and until 1985, all expenses were covered by the generosity of community donors. Then, the Medicare Hospice Benefit provided a regular source of reimbursement. Eventually, most health insurance companies offered hospice coverage as a benefit.

Hospice Service of Licking County achieved Ohio Department of Health licensure in 1985 and began offering respite care that was offered in a room at Licking Memorial Hospital. Kathy Ritter, RN, BSN, was appointed director of nursing and also assumed the duties of executive director. To keep up with the increase in patients, the organization hired part-time nurses to provide care in patients’ homes.

Jim Moss was appointed as the third executive director of Hospice Service of Licking County with the goal of making the organization a world-class organization. He had led a three-hospital healthcare group and was a former state president of the Ohio Hospital Association. A visionary, Jim made it possible for the organization to be on the cutting edge of technology at the time. He provided the staff with beepers, bag phones, and eventually, cell phones. Such technology made a huge difference for the staff and the operation, who spent most of their time in patients’ homes, and provided care and services 24/7. 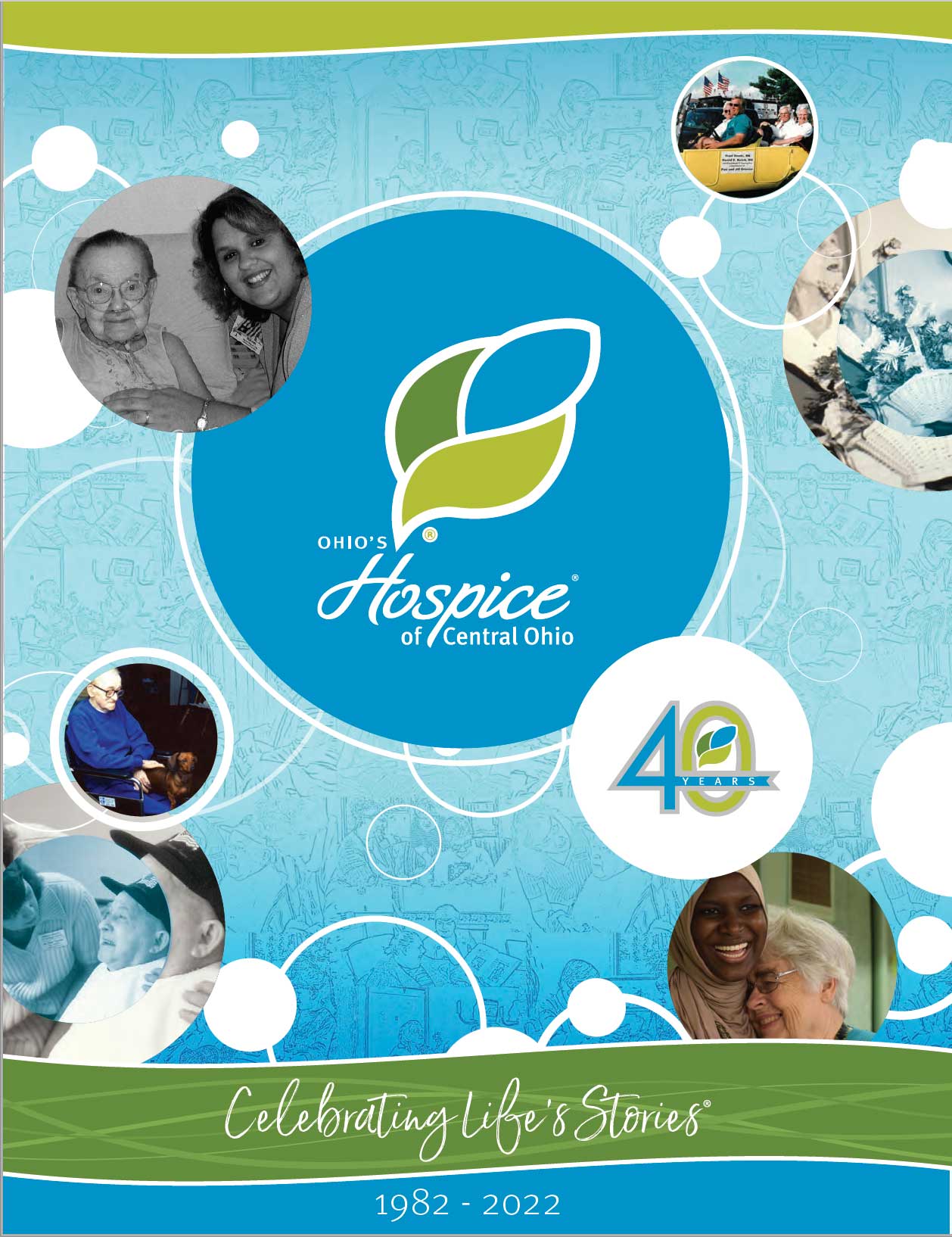 Our mission is to celebrate the lives of those we have the privilege of serving by providing superior care and superior services to each patient and family. We are a not-for-profit, community-based hospice.

Our mission is to celebrate the lives of those we have the privilege of serving by providing superior care and superior services to each patient and family.
© Copyright 2022 Ohio's Hospice, Inc. The logo and icon are registered trademarks of Ohio's Hospice, Inc. All rights reserved.
Back To Top
We use cookies on our website to give you the most relevant experience by remembering your preferences and repeat visits. By clicking “Accept All”, you consent to the use of ALL the cookies. However, you may visit "Cookie Settings" to provide a controlled consent.
Cookie SettingsCookie PolicyAccept All Cookies
Manage consent

This website uses cookies to improve your experience while you navigate through the website. Out of these, the cookies that are categorized as necessary are stored on your browser as they are essential for the working of basic functionalities of the website. We also use third-party cookies that help us analyze and understand how you use this website. These cookies will be stored in your browser only with your consent. You also have the option to opt-out of these cookies. But opting out of some of these cookies may affect your browsing experience.
Necessary Always Enabled
Necessary cookies are absolutely essential for the website to function properly. These cookies ensure basic functionalities and security features of the website, anonymously.
Functional
Functional cookies help to perform certain functionalities like sharing the content of the website on social media platforms, collect feedbacks, and other third-party features.
Performance
Performance cookies are used to understand and analyze the key performance indexes of the website which helps in delivering a better user experience for the visitors.
Analytics
Analytical cookies are used to understand how visitors interact with the website. These cookies help provide information on metrics the number of visitors, bounce rate, traffic source, etc.
Advertisement
Advertisement cookies are used to provide visitors with relevant ads and marketing campaigns. These cookies track visitors across websites and collect information to provide customized ads.
Others
Other uncategorized cookies are those that are being analyzed and have not been classified into a category as yet.
SAVE & ACCEPT
Powered by